And now… introducing… in a Positive Feedback return performance… DH Labs Silver Sonic BL-1 interconnect. You’ve read about these here and possibly elsewhere. This is another “I-wrote-`em-off” story. This time it was because a $95 woar (“wire” for non-Texans) seemed unlikely to be anything more than a decent “entry level” interconnect. I won’t even keep you in suspense over this one. I am replacing some interconnects in my system with DHL SS BL-1 because the first review pair sounded so good. The wires replaced ranged from 2x to 6x the price of the $95 per meter pair Silver Sonic BL-1. 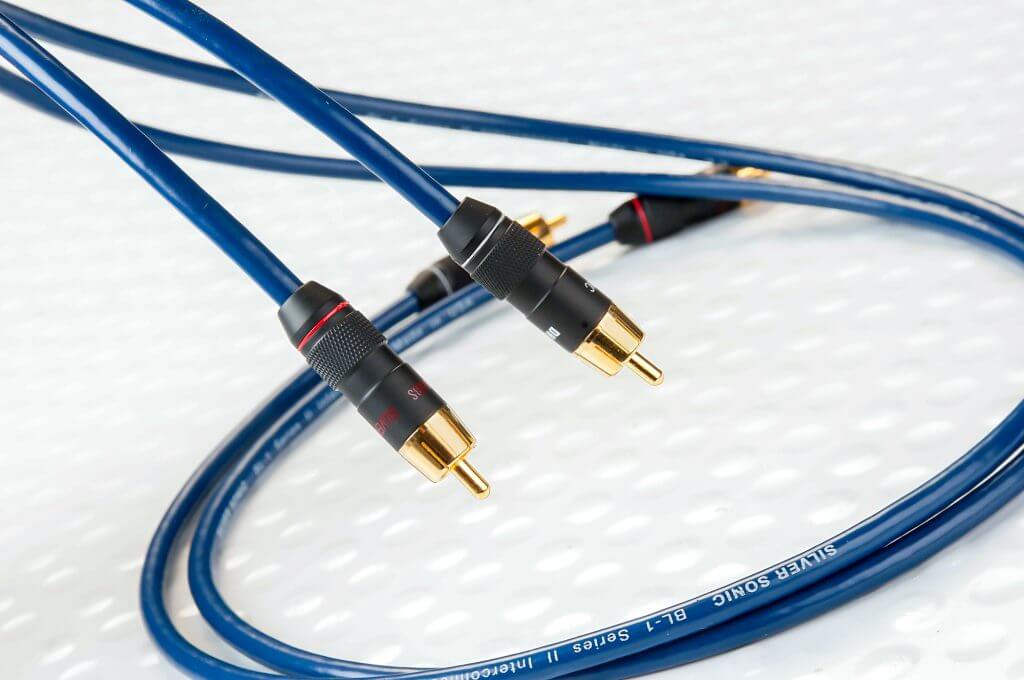 The bulk wire is only $3.50 a foot! The 20-gauge stranded conductors are made of high purity copper wire with a double-thick “5 nines” silver plating. Insulation is the highest grade of Teflon available. The type of Teflon specified for use over silver to prevent oxygen migration that would let the silver oxidize. There are 2 conductors in a twisted pair. Twisted with them is a poly fiber damper and an uninsulated drain wire for the shield. Over the top of this “assembly” is a full foil shield. A blue PVC outer jacket completes the package.

I tried the Silver Sonic BL-1 interconnect between CD player and preamp first. It was a significant improvement over Aural Symphonics Gen. 2 which had been selected over some far more expensive wires. Not because A.S. Gen. 2 was less expensive (about $180/m-pr), but because it sounded better than the more expensive wires. Along comes the BL-1 and just knocks the AS Gen. 2 right out of there. Better in all respects.

The surprising success with the CD/preamp interconnect initiated a string of phone calls to owner Darren Hovsepian. Each call reminded me of calling Mom and Dad from college and asking for more money. “Darren, do you think you could send a hundred feet of BL-1 and some hookup wire and some spades and some RCAs and some solder and some T-14? There are a few experiments I want to try.” Each time I tried the BL-1 interconnect in a new location, it successfully replaced the wire I had been using. This was a first for me. In the past I’d always found certain wires that worked really well in one application, but not so well in another application. I was impressed that BL-1 could work so well in so many different locations and applications.

Other people had written about BL-1 being so much better than their previous wires, but I wasn’t that impressed with those other wires. Hearing BL-1 for the first time was an eye opener. When I finally reconciled the low cost with how much more connected with the music I get with BL-1, I realized there would be another problem… making this “review” sound credible. Darren’s pricing of BL-1 ($95 per meter pair, $125 per 2 meter pair, + $23 per additional meter pair or $3.50 per foot bulk) is also a “problem.” Are you sitting there taking what I’m writing seriously? Are you thinking “an excellent performing interconnect for $3.50 per foot, I have to try this right away!” Or “yeah, sure, I’ve heard it all before, Radio Shack 3400 all over again.” I’m guessing that more of you are uninterested than interested, and that is too bad.

My wife is not often moved by small improvements, shrugging her shoulders more often than not over a little better bass detail or sweeter highs. She hears it, but doesn’t get too excited. When she sat down and listened to the system after all the Silver Sonic wire was burned-in, she actually said, “Man, that sounds a lot better. I bet you aren’t sending THOSE back.” And I guess she’s right.

Here’s why, in my view, the Silver Sonic BL-1 was able to “beat” wires costing many times its price:

Even if you aren’t interested in new interconnects, DH Labs Silver Sonic BL-1 wire could surprise the heck out of you. If you think your expensive wires must sound better than these, think again. If you think all your system needs is your good-for-the-money <$100 interconnects to sound its best, think again. BL-1 transcends good-for-the-money wires. This wire is good by any measure. If you can’t find a local dealer who has DH Labs’ products, contact DH Labs at (561) 745-6406.