as reviewed by Dave Clark

The DH Labs Silver Sonic Revelation interconnects feature a relatively simple design based around silver and Teflon. What makes them a bit different is that they use six silver conductors in an interleaved, helical array. The silver wire is very pure and highly polished, and each conductor is individually insulated in an air-spaced, tape-wrapped version of what DH Labs calls their Air Matrix dielectric. This means that while the cable does use Teflon as the dielectric, it is applied in such a way that it mimics the use of air. The cable is jacketed in an attractive blue woven fiber, a nice alternative to the black or white nylon poly materials used by way too many other manufacturers. What you end up with is a beautiful cable that is fairly flexible and does not mimic a large black snake. 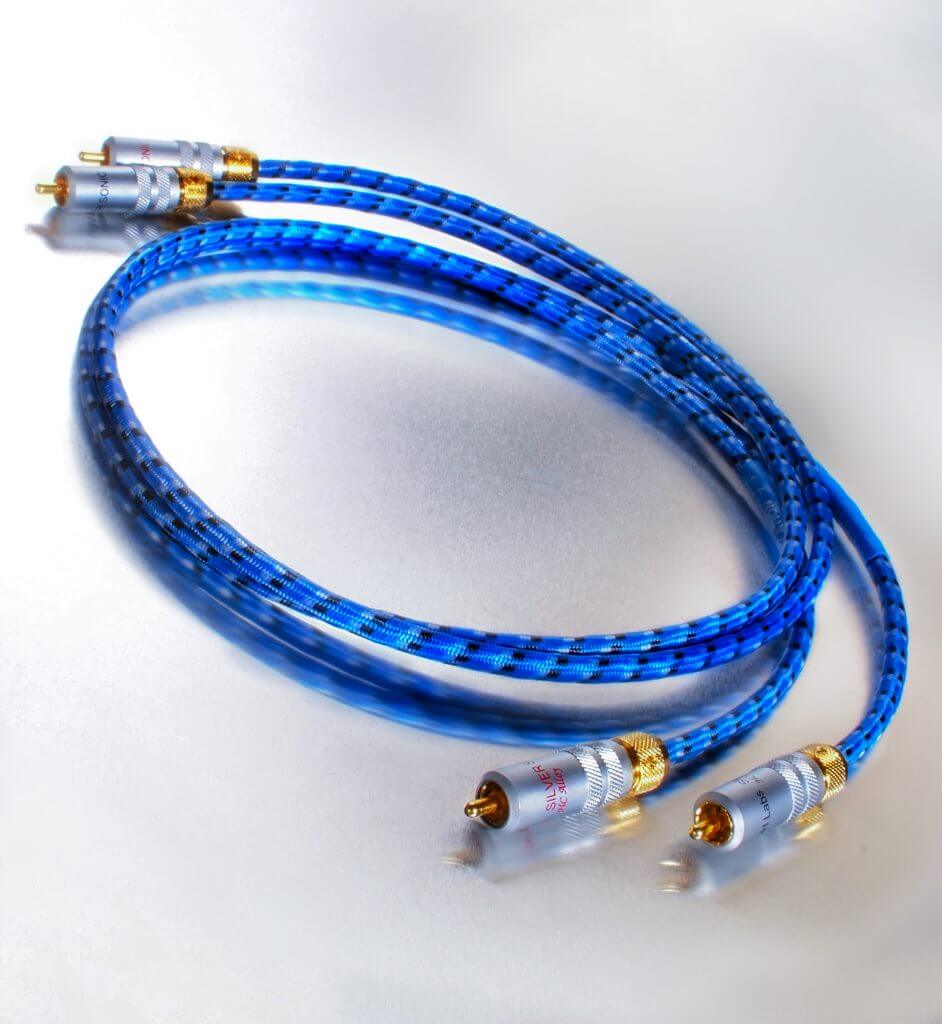 The cables I had for review had high quality, locking RCA plugs reminiscent of those offered by Vampire. More recent Revelations feature custom-machined RCA plugs. DH claims that the majority of RCA plugs are made from brass alloys that are at best 60-80% copper, with the other 20-40% being a combination of zinc, lead, even tin. They feel that the issue here is the loss of conductivity, so their new plugs use a 99% copper alloy. Meaning that the conductivity number is more than twice that of conventional connectors—at least by the literature supplied from DH Labs. Not having heard the Revelations with the new connectors, I cannot say whether they are better, though one can only assume, that greater conductivity should be an improvement, especially with small signal levels.

Substituting the Revelations for my usual JPS Superconductor 2s between my CD player and preamp resulted in—are you ready for this?—a revelation. First, they did not sound he least bit stereotypically “silvery,” and second, they sounded WAY better than their price would suggest. The Revelations though did not transform my system or elevate it to another level, what they did do is offer me the ability to change the tonal presentation—not drastically, but enough to suggest an alternative “musical window” to the one I am used to hearing. Better cables will do just that—allow one to make subtle but important changes harmonically or tonally without messing things up. I listened to a wide variety of music, and the Revelations were consistently musical and enjoyable, regardless of the mood I was in. The descriptors that came to mind were: “detailed,” “warm,” “airy,” “palpable,” “dynamic,” “visceral,” “harmonically complex,” “subtle,” and “fast,” with great dynamic swing and pace. All of this came in a natural and musical way that did not sound etched, hard, glassy, or bright—all descriptors of silver cables at their worst. I should mention that the Revelations did not sound like DH’s previous upper-end cables, the Air Matrixes, which are great cables at a reasonable price, but they can sound “silvery.” Hearing them in my system a while back, I found them to be very detailed and open, but mentally comparing them now to the Revelations, the Air Matrixes will come across as a tad too bright and less refined. Keep in mind, though, that a cable may sound bright in one system and well balanced in another.

In comparing the Revelations ($350 a meter) to several cables that all cost considerably more (Pure Note Epsilons at $500 a meter, JPS Superconductor 2s at $700 a meter, and Audio-Magic Clairvoyants at $2200 a meter), in no case were the Revelations embarrassed, though the Clairvoyants were in a completely different league. Compared to the Pure Note and JPS cables, the differences were “a tad more of this and less of that,” with no serious shortcomings or differences. The Revelations simply sounded too damned good for the money. Although the JPSes went deeper, with more power and slam in the bass, and offered a bit more extension and clarity than the Revelations, the differences were truly a matter of “seasoning.” I think both are killer cables for the price, though the JPSes are so stiff that tradeoffs do come into play. The Pure Notes offered more presence, detail, and a sense of “silkiness” to voices that was very captivating, but again, this was more an issue of taste than one of either cable being “better” than the other. Again this is more reflective of subtle coloring or seasoning that the better cables can offer the audiophile. The Revelations also added a touch of warmth—like a very good SET minus the colorations and distortions—which the Pure Note and JPS lacked. And unlike an SET that has problems of extension at the two frequency extremes, the Revelations are very well extended and dynamically fast.

At $350 per meter pair, the Revelations provide a richly-colored, open and clear window on the music. If you have a well-balanced system, but are looking to upgrade your cables, I would put these on the list. You will give up a bit of detail and openness compared to other cables, as well as some heft in the lowest reaches, but at this price the Revelations are simply a steal. They offer a silent “blackground,” are flexible and beautiful to look at, and are a reference for just how good an inexpensive cable can be. Be patient, as the Revelations require a substantial break-in period. I found that two to three days on a Cable Cooker, along with a few hundred hours of playing music, was needed before things came together. Before that, images could be fairly non-specific and the bass a bit bloated and loose. Once time has served them, however, these cables are a real marvel. Highly recommended!